Today, I saw something that struck a chord with me. Unless you’re living under a rock, at some point in the day you will be interacting with some aspect of social media. If you’re not personally using it, someone around you will be talking about something they saw online. We’ve reached a point in history where the majority of the news now comes from social media. How insane is that? Of course, newspapers and magazines won’t be vanishing any time soon, but with this, we can really see the impact of social media on our daily lives. For me, my favorite social media platform is Twitter. As a micro-blogging platform, Twitter brings the perfect combination of important information and user interaction to the internet. Take for example the NBA Finals and the coverage seen on Twitter. The time during and leading up to an NBA Finals game, Twitter is a constant bombardment of game updates and trash talking. 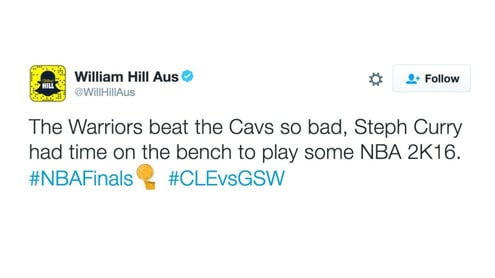 Putting aside the questionable things said during an NBA Finals game, consider the idea of two possible strangers arguing, and sort of bonding, over the love of basketball. And if you take into account the conversations held between the fans and the teams themselves, then you can truly see importance of having this connection at the touch of a finger.

An NBA team’s Twitter account can play a crucial role in the relationship between the franchise and the fans. Not only is it the fastest way of updating the fans on team coverage, but it’s also a place to lay back and have fun with the game along with the fans. NBA Team accounts that are able to find a balance between professionalism, and playfulness, are the accounts that outshine the rest. Take for example the Portland Trailblazers, who have recently been named the NBA’s best Twitter account for the second year in a row. Besides having play-by-play coverage of the games in real time, the team does a great job of interacting with their own fans, and the fans of their opponents. In essence, the Portland Trailblazers are true trailblazers in the art of NBA social media with the usage of funny GIFs, memes, and cultural references in order to connect with followers. 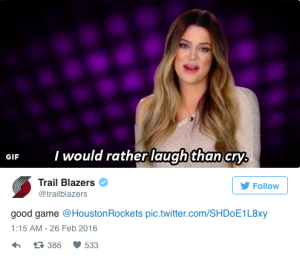 As the NBA Finals continue to drive engagement among NBA teams and their fans, take some time to check out your favorite NBA team’s Twitter account or trending hashtags surrounding the upcoming game(s). Retweet a picture, tweet back to your favorite sports reporter, and join in on the new age of conversation!

Sally Salado is a recent Miami transplant and one of TK’s newest Account Coordinators. With almost two years of professional digital marketing experience, it comes as no surprise that her favorite topic to talk about is social media. When she’s not nose deep into her phone reading the latest news or watching the next viral video, then you’ll find her with a camera in hand, exploring what Atlanta has to offer.