The Convergence of Creativity & Discipline

For years I kept a yellow legal pad on my bedside table. I was always ready to scribble down ideas in the dark I knew I would forget in the light. That paper has been replaced by the ‘Notes’ function on my smartphone, but early-hours inspiration still strikes, and I tap out those quick bits by back light. You probably do the same.

Japanese sushi master Jiro Ono understands this habit.  “In dreams, I would have visions of sushi,” he says in the aptly-named Jiro Dreams of Sushi, the documentary about his life and business. “My mind was bursting with ideas. I would see ideas in dreams. I would wake up in the middle of the night.”

Many food critics consider Jiro to be the world’s greatest sushi chef. He has been working with fish for almost 80 years. His tiny, 10-seat restaurant, Sukiyabashi Jiro, sits inconspicuously inside a Tokyo subway station. Yet, it was the first of its kind to be awarded a three-star Michelin rating. (This designation means a trip there is completely worth any distance traveled.) 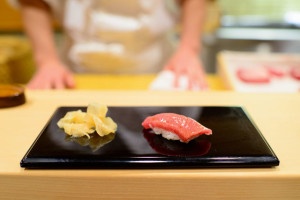 The most amazing part of the story, however, is Jiro’s drive and obsessive approach to discipline. He is stern and stoic and does the exact same thing each day. He may well be the world’s most annoying micro manager—overseeing and touching everything in the restaurant, from the rice to the evening’s seating arrangements.

And he is never satisfied.

“All I want to do is make better sushi,” he says. “There is always a yearning to achieve more. Even at my age, after decades of work, I don’t think I’ve achieved perfection.”

But within Jiro’s rigid framework lies something divinely artistic and wonderfully creative. You can see (and certainly also taste) it in his sushi.

He still answers the muse of his dreams.

For me, this movie is a reminder of the truth that some of our best work occurs at the convergence of creativity and discipline—where those late night, wily, subconscious-borne ideas meet the ever-present bedside tablet.